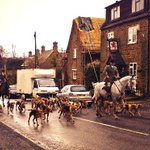 I love riding, even though I’m very unstylish, and my feet stick out from the stirrups like a duck’s.

Every now and then, one of my horsey-set friends will get pissed in the pub and say I must come out with them on a hack, or mess around with some jumps or something. Usually, I’m there, next morning, hat crammed on hung-over head, desperately trying to figure out a new horse before it recognises a hobby rider, and chucks me off.

This Saturday though, I was not hungover, and I was invited to ride out with Lucy, the yard manager for Prickett’s, in Horley. The owner, Caroline, is an Eventer, and they have hordes of impossibly shiny Eventers in the stables, as well as a few very glamorous livery horses (complete with glamorous owners).

I was HUGELY excited, and very nervous in case I goofed in such professional company.

I turned up at 9 o’clock sharp, and instantly realised I didn’t quite look right. My ancient navy jodders have more darns in them than a shark net, and my daughter’s hat (I couldn’t find mine) had long ago lost its silk.

She popped a silk on my head as if hiding an ugly teapot.

Her telephone then rang (it rings constantly), and I was left to eye up my mount. Bucky, an ex-champion race horse.

He was very tall and thin, covered with orange fluff like an Orangutan.  I went into his loose box and made friends.

‘You can tack up?’ said Lucy, bowling past and leaving saddle and bridle.

‘No worries!’ I called. But I didn’t really get a chance to find out, as an indomitable lady with a busy air and sweet smile appeared. I stood there looking useless whilst she hauled on bits of Bucky’s kit.

‘What hole’s his flash band?’ she said. I dithered and she sent me a pitying look.

The next moment, Bucky was securely trussed, and the lady whisked out, off to meet her daughter from the London train.

‘Thanks,’ I called. Bucky tried to eat my anorak.

Just as we were leading the horses out, a voice called to see if she could ride with us.

‘We’ll be going slow,’ yelled back Lucy. ‘Carles is on Buckaroo.’

The voice laughed, and I quailed further when she came into view. Beautiful blonde, with an impossibly handsome bay. She very politely didn’t mention the two inches of hiking-sock sticking out between my boots and jodhpurs.

We mounted and started off, me frantically trying to remember hands-down, heels-down, arse-in-the-saddle mantra. The combination of extremely capable Lucy and extremely glamorous Belinda made me very shy. I barely spoke as we walked out of the village.

Bucky kept dropping his right shoulder because his poor old bones were stiff, and I kept lurching to the side and grabbing his lack of mane. Belinda’s Perry insisted on skedaddling sideways and Bucky eyed him with disparagement.

Gradually, I got used to Bucky’s uneven gait, and relaxed enough to enjoy myself. My favourite thing about riding through villages is to peer into all the gardens and see what everyone’s planting. I was gawping over one wall at emerging daffodils when a grumpy brunette revved past in a silver people-carrier. ‘Bloody horses, ‘ I lip-read.

We headed towards Wroxton, smartly trotting now, and Bucky had warmed up enough to keep pace with the other two. Belinda turned out to be not at all scary, and to be a Humanist Minister. Her and Lucy’s conversation was so interesting I totally forgot to steer, and Bucky kept diverting to open gateways, like an elderly motorist pulling over for a break.

We reached the Drift Road and turned around. Bucky immediately changed gear, and pulled like a train to the front, shaking his head if I tried to check him.

‘Race instinct,’ called Lucy, as we shot off up the verge. ‘He just wants to be in front.’

I manned up, and sat like a stone, pull-leave, pull-leave on his bit. He heaved a sigh and slowed.

Belinda was talking about her counselling practice now, and I kept hearing tantalising snatches of advice for one of Lucy’s friends.

All too soon we were back in Horley, turning up the drive for Sor Brooke Farm.

‘There’s Caroline,’ said Lucy, as we passed a blonde doing some very s-l-o-w fancy cantering in the school. But Bucky wasn’t keen on stopping. At least no one was down in the yard when I slid inelegantly off his back. I landed heavily and staggered when Bucky turned to rub his lovely face up and down my body. Grateful for his shambling kindness, I put my arms round his neck, kissing him thank you and covering myself in ginger fluff.

Happiness is found on the shoulders of champions.